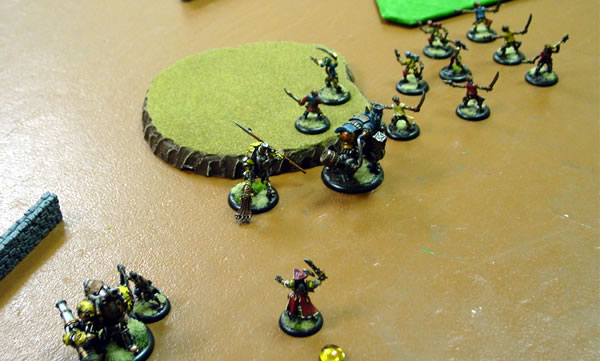 The Buccaneer and Mule both receive focus to run up the field and try to keep up with the Sea Dogs and Hawk. The Mariner simply advances with Dougall as his loader and starts taking ranging shots. Unless the shots hit, there's no point check deviations against the highly armored warjack army (the less armored Gun Mage Captain Adept is hiding in the back). Captain Bart puts Hotshot on the Mariner and slowly advances up the table.

If there's an opening, Hawk will try to slow down the Gun Mage Captain Adept or Darius. The Sea Dogs are just walking pieces of ablative armor that show no fear under the watchful eyes of the First Mate. 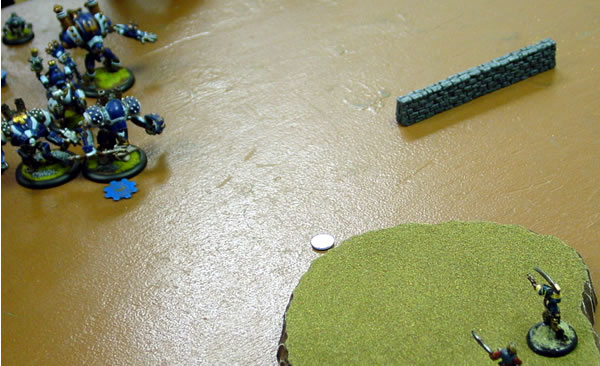 Darius tries to shoot a Sea Dog, but misses. The shell of his Steam Cannon deviates into the dirt and will explode on the next turn. He casts Fortify on his Centurion and starts to move his warjacks around it in the event that I remember that I can use warjacks to slam (I never do).

The Gun Mage Captain Adept continues to hide out, waiting for a useful shot. 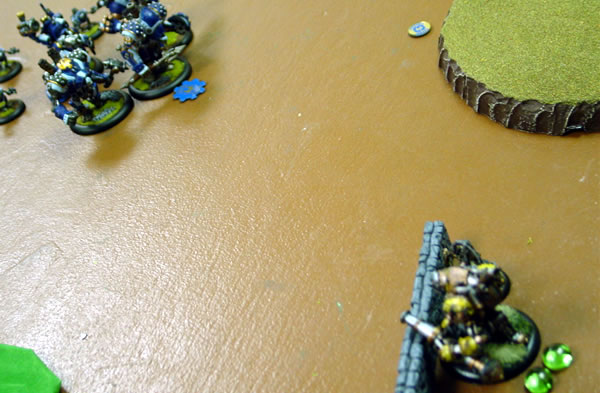 The Mariner starts the salvo

With Hotshot and Dougall's Artillerist ability, the Mariner starts to pour fire into the warjacks. On its turn it hits the Ironclad while Bart's Broadside causes it to further damage the warjack. Hotshot bonuses against a heavy warjack almost guarantee a hit, though I'm surprised to find that the Ironclad is a DEF 12 warjack (I'm used to Protectorate heavies being DEF 10). With Hotshot and Artillerist, my Mariner needs to roll a 6 for direct hits and I get them with boosted rolls both times. 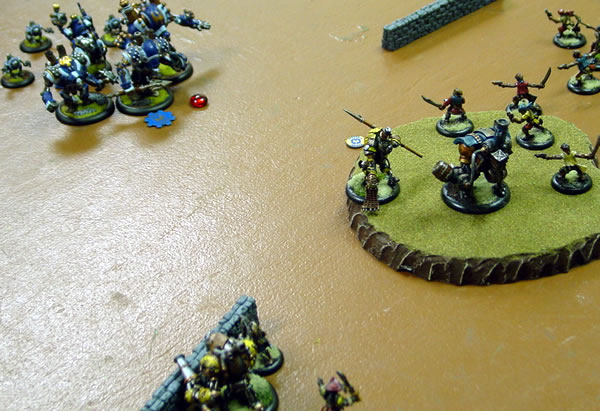 The Buccaneer takes both tries to catch the Centurion with the net. It becomes DEF 7 and next turn it will have to sacrifice either its movement or action, which means no charges against my force this early. It easily could have trashed my Buccaneer with its 2" Reach and Darius's Full Throttle spell. Without the net on it, it could have charged 8" with boosted to-hit rolls!

The Sea Dogs get a little too close to the unexploded Steam Cannon shell (at least that's what I think it is), while the Mule is still too far to do anything other than pray for a deviation onto the Gun Mage Captain Adept. Of course that means it doesn't happen.

Now for my next trick 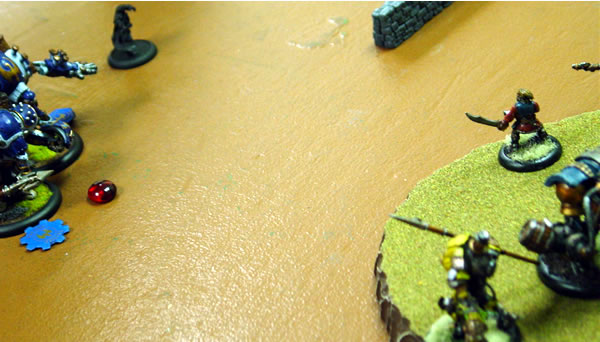 The Pressure Cooker goes off, but the nearest Dog manages to be just outside its heat.

Darius powers the Thunderhead, and it leaves Darius's side to confront the Sea Dogs. He uses an Electro Pulse to target every Sea Dog within 8", and then he powers his fist to make separate ranged attacks to try to finish them off. 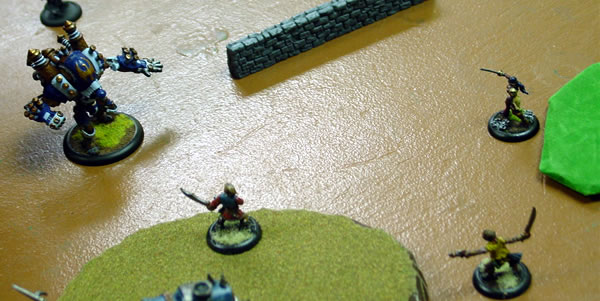 Sea Dogs go away, but the Hawk remains, which keeps the rest of them in line and by her side.

The Gun Mage tries for a shot as well, but misses.

If a pressure cooker goes off in a forest, does it make a sound?

Darius fires his Steam Cannon at Hawk. If it had hit, she'd surely be dead as there was no Sea Dog near enough to trigger Sucker! Instead it deviates behind her, harmlessly, in the forest. 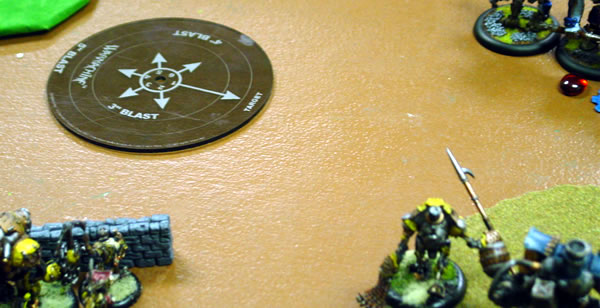 I seriously have no idea what's going on in this picture

I suspect Dougall uses his feat to give Double Powder Rations to the warjacks, increasing their Range and POW. It would explain the following picture. 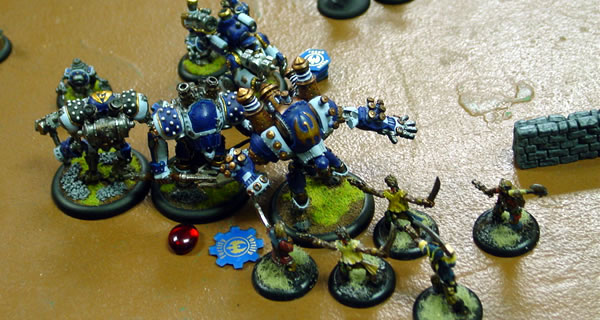 Sea Dogs tie something up

Multiple Mariner shots turn the Ironclad into a smoking wreck (as opposed to a smoking warjack), and yet another net captures the Centurion. The Buccaneer tries to put a Net down onto the Thunderhead, but at RAT 4 vs. DEF 12, it's not to be.

The AOEs start to take their toll, eliminating at least one Halfjack each turn. Darius continues to poop them out, of course, but the pressure is on.

So the Sea Dogs charge the Thunderhead, while Hawk (who's unable to charge due to the linear obstacle) runs over the wall to engage the Gun Mage Captain Adept.

Predictably, the Sea Dogs do very little damage to the Thunderhead. 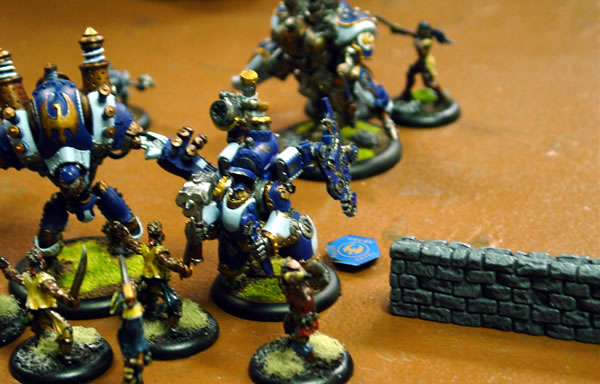 You call that a wrench?

Darius's crane lifts up the Centurion and places it directly into combat with Hawk. He then moves up to stand side by side with the Thunderhead as they start to swing at the hapless pirates. 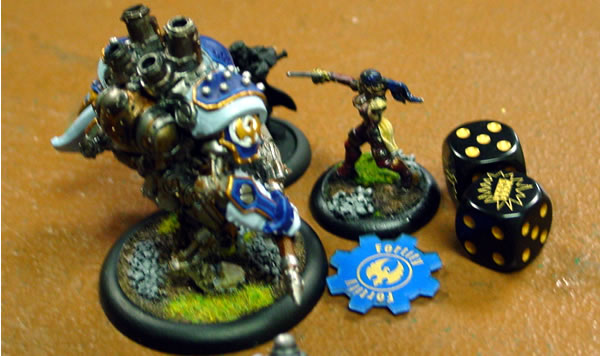 All the Centurion has to do is hit the lass, and it does. Twice. Each time, she stands back up making her tough rolls.

The Gun Mage draws out his sword and finishes the job. 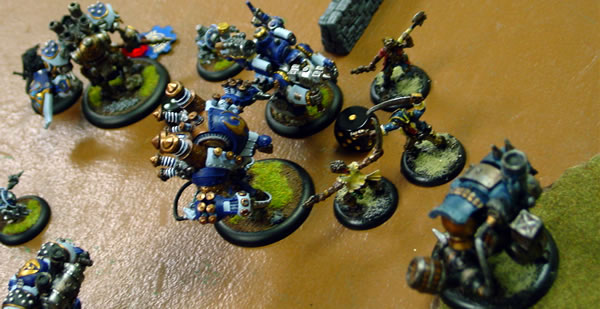 And then there were 3

Darius and his Thunderhead deal enough damage to winnow the Sea Dogs down. But it's not enough. First Mate Hawk was still standing when they would have had to make their command check, so they were Fearless at the time. She died afterwards, and so they stand face to face with Darius. 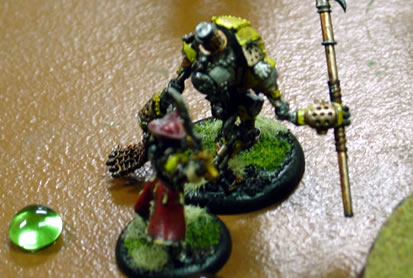 Bart moves his Buccaneer up, and charges it to gain 3 extra inches of movement. As he tears into his own warjack, he summons a Typhoon that threatens to knock Darius and his Battlegroup off their feet.

His three Dogs try to charge Darius, but fail to do more than a couple damage to his Powerfield. 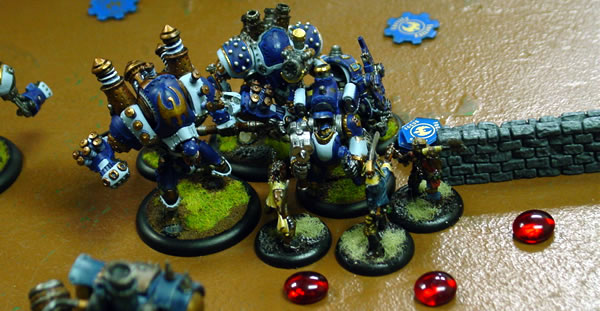 The Fortified Centurion moves into position beside Darius and the Thunderhead. Though Bart's Typhoon rages above, all of these models will stand.

Secured to his Centurion, Darius drops his hammer and drops the three Sea Dogs to the ground. Every attack then hits, and all the Sea Dogs expire. 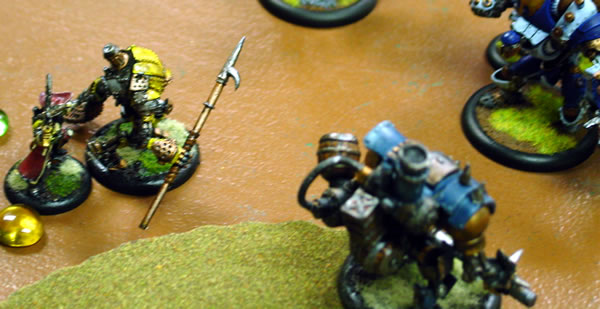 Could Bart have charged Darius?

Would he have hit?

Would that have Roused his Mule and given it a free charge and +2 to hit?

Should I have had the foresight to load it up with focus for multiple high STR attacks?

Let's just say that once I answered no to Bart's charge, I lost the game. 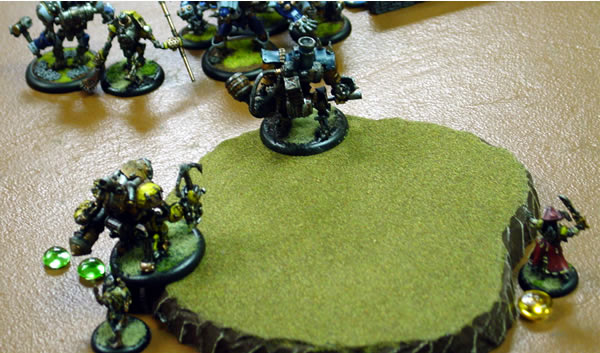 Oh looky! That Ironclad I worked so hard to destroy? Yeah, it's back. 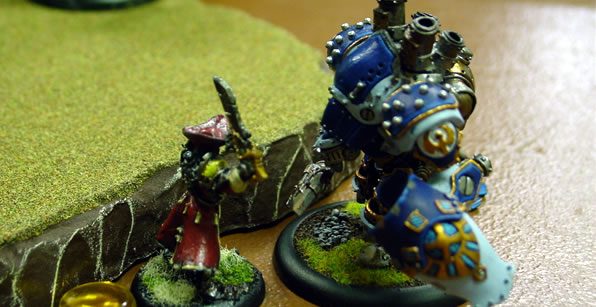 I blew it. I had the charge and I didn't see it. I saw it right after I moved away from it. For some reason I thought I could do enough damage shooting that I forgot the strength of heavy warjacks was a high concentration of melee power. Even if Darius had ARM 20 at the time a Mule and Bart charging in with full focus on both would have done the job. I'll roll the dice now!

First off, I must say that playing Darius isn't exactly hard and he is extremely forgiving of mistakes, but I love Warjacks, so Darius is my go to guy here. As to the battle itself, I did leave Darius exposed, but that was just they way they ended up after the anti-feat Fortify pile. It worked well, as I just craned the Centurion up, Jack Hammer'd it and let it go to town on Bart. Pretty much standard Darius there, but if it ain't broke...

Again, my thanks to Malf for putting this up, and thanks for a fun two games.