Siege uses Breach, halving the ARM of models in his control area (first attack to penetrate only). He takes one look at the Sea Dogs looking to Show Off to their lady commander Hawk and aims his Ground Pounder at them. Four Sea Dogs die: three directly and one takes the hit for Hawk. 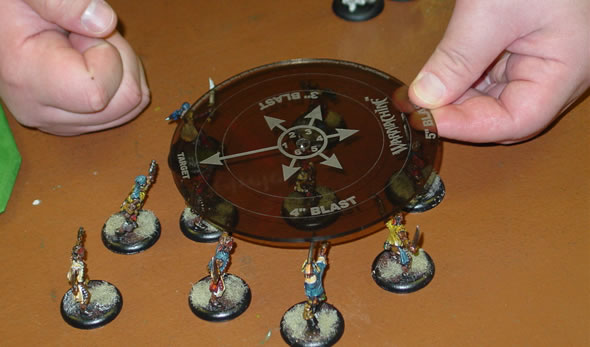 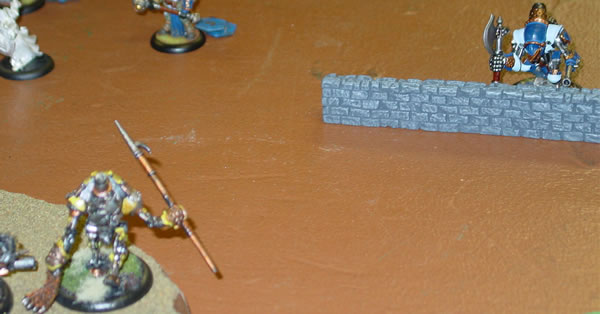 Half armor? try a quarter!

But The Buccaneer still has a net.

The Hunter uses its Reserve Tank and retreats to the rear of the army.

In a combined effort, the Long Gunners open up on the Mule, dealing damage with their combined fire and dual shots. 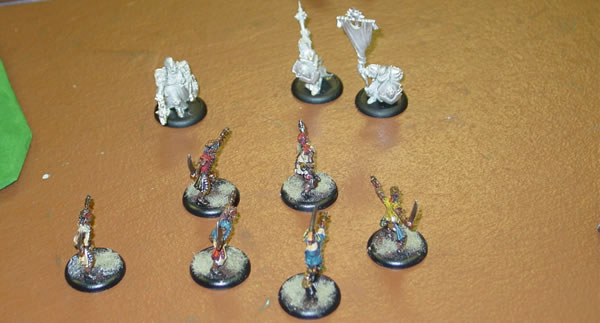 Sensing their incoming death, and knowing that the Long Gunners' survival relied on not allowing the killer Hawk into their lines, the Battle Chaplain declares a charge and prays In Morrow's Name, adding an additional damage die to their rolls. As one knight positions himself to occupy the foremost Sea Dog, the Battle Chaplain himself deals with Hawk. And with the effects of Breach up, the four damage dice is a guarantee (not to mention that she fails her Tough roll).

The Sea Dogs are down, but not out. They are no longer Fearless without Hawk on the table, but they haven't lost enough troops to take a leadership test.

The Lancers start to run around the woods to try to turn Bart. 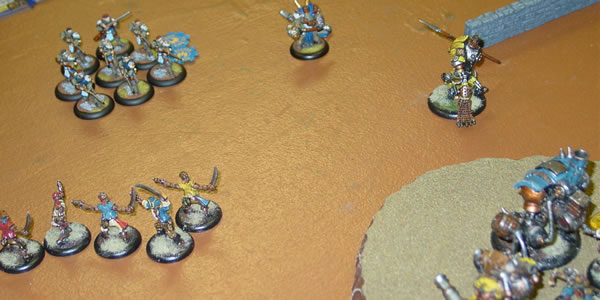 Every gun I own

The Sea Dogs charge the remaining Knights and take them out of the game, but leave the Sea Dogs standing in the open for Longrifle fire.

The Master Gunner declares Double Powder Rations for every warjack in range, and every warjack gun fires. The Buccaneer's Net, the Mariner's Hotshotted and Artillerist enhanced Sea Gun, and the Mule's Steam Lobber all open fire on the lone warcaster. Steam Pressure gives the Mule extra range. And then Bart activates and they do it again (minus the aiming bonus for the Mule this time). Then he summons the Typhoon and threatens to knock over anything that tries to get too close, including the Storm Lances that have encircled Bart's force.

When the smoke clears, both Nets have failed and Siege's powerfield is severely battered, leaving him with some 4-5 damage boxes.

The Hunter finishes off the Mule with its penetrating fire and a single Long Gunner volley wrecks the Buccaneer. 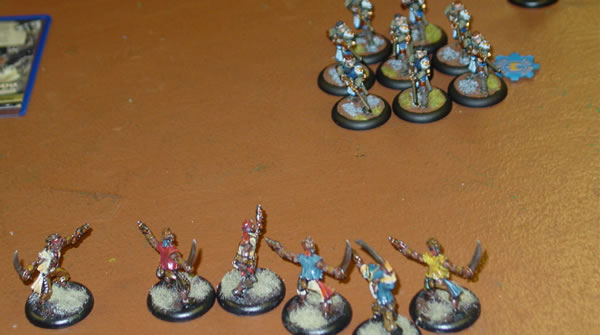 "See the world," they said

With their remaining shots, the Long Gunners finish off the standing Sea Dogs.

Siege hurries behind his Long Gunners and restores power to his field. As the Storm Lances approach Bart, one runs too close to the Typhoon and finds itself knocked down, while the remainder of his squad slows their advance to accommodate the howling storm.

Bart finds himself trapped between a storm of lances and a hard place as the Mariner also suffers a volley that wipes it off the table. He can't charge through the wrecks, and he certainly can't turn to face the Lances all by his lonesome. So he and Dougall do the next best thing.

The next best thing

Bart overboosts his powerfield so that he sits on an ARM 22 and runs to engage the Long Gunners. It was too bad that I hadn't the foresight to cast Crow and force a command check, but those are hardly useful anyway.

Dougall positions himself on the other side and dares the Lances to bring it on.

We're just going to back up a little bit...

The Long Gunners attempt to disengage from hand-to-hand combat with Bart, but two men die to Free Strikes. At this point we don't know whether or not I get to use the 1" Overtake move for successful Free Strike deaths.

The Hunter, with no medium or large base models on the table, takes a shot at Bart, boosts, and scratches him as well. 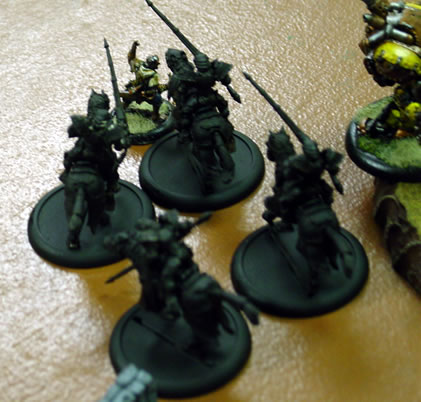 The Storm Lances bring it to the Master Gunner. Later on, I remember that Dougall is Tough and deserves a roll to see if he survives. He dies again. 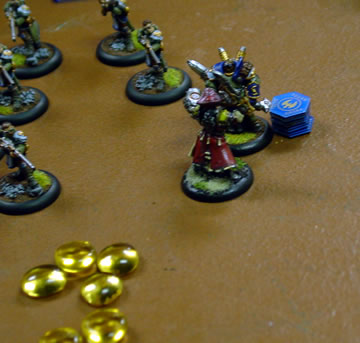 Emboldened by his army's successful shooting, Siege charges in for the kill and proceeds to damage Bart with Havok. The hammer pounds into Bart again and again. 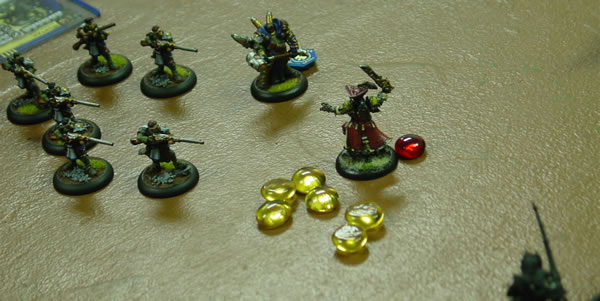 But it pounds a little TOO hard, and knocks Bart out of melee 2". Bart's on his back, but Siege can't finish the job by himself.

Bart stands up, casts the Powder-keg using his remaining focus to boost to-hit and boost damage, and basks in its backwash of the AOE. Siege disappears from the battlefield, hoping to fight again.

Siege: I love this Warcaster. I think he did alright this time (except for that damn Critical Slam!) I'll have to remember to read rules more carefully and remember when something says "may do X." Foxhole is a godsend for Long Gunners, and I timed his feat pretty well I believe.

Storm Lances: Should have kept them with the army and directly charged. Running around the army and harassing the opponent from behind is fun, but I don't think it worked so well this battle.

Precursor Knights: Good unit, but a bit pricey. Hit like a ton of bricks with that mini feat. Arcane Shield would be even nicer for them. Didn't really do a lot this game, except for keeping the Longgunners out of a charge, so that's good. (Note that Spell Ward on the Precursor Knights precludes them from having Arcane Shield being cast on them- malfred)

Jr. and the Hunter: I love this setup as the Hunter's extended range helps Jr. a lot, and 2 focus is perfect for the Hunter. Heavy Jacks fear the Hunter, rightfully so.

Long Gunners: MVP's for me. These guys put out so much hurt. Kills on the Sea Dogs, kills on Jacks, and if it weren't for Bart sitting on a lot of focus, they'd have hurt him pretty well too. Great unit, and Siege makes them so hard to kill with that blast immunity from Foxhole.

In the end, I had fun, Malfred is a great opponent and I got some games of Warmachine in, so it was a good day. And thanks to Malf for setting this up.

Bart's aoe ranged warjacks vs. Siege's Foxholed Long Gunners was an interesting match up that provided some unique problems. However, I felt that Foxhole meant that I was going to focus fire on everything EXCEPT the Long Gunners and then save the Long Gunners for melee (if possible). Denial elements in an army have a way of forcing you to completely eliminate other portions of the enemy's army.

I'm getting a ton of mileage out of Dougal/Bart/Warjacks. Dougal is the perfect loader for the Mariner (immune to blast damage). He becomes more susceptible to "bouncing" effects (chain lighting, ashes to ashes, etc.) and anything that threatens with such a tactic becomes a high priority target because you don't want to tie Bart to the Mariner in this low model count army.

Sadly, Hawk did not get to be much more than a distraction. I think it's a mistake to put her out front, even with her defensive ability Sucker. She needs to be behind or surrounded by Sea Dogs so that a few shots don't eliminate her Sucker targets and to keep enemies from charging her easily. With her Acrobatics ability she should be able to line up charges from the second wave in an army.

I think Thanatos's Storm Lances needed to be crammed down my throat and force me to make different targeting decisions. As it was, the Precursor Knights had giant bulls-eyes on them without the immediate threat of cavalry or the enticement of wiping out the Long Gunners. Also, I think Arcane Shield was wasted on a unit that removed itself from being presented as a target. It would have made more sense to have it on Siege or the Long Gunners in this battle (assuming that Thanatos ran his Lances the same way).