Mob Description: Tearing into the enemy, diving 'in wiv both feet', The MeanGreenStompaz are amongst the most feared and unstable mobs of Waaagh Dakka. Swooping into the midst of the opposition to maul and rend, led by the blind fury of their boss, the cybork megalomaniac MeanGreenStompa and his terrifying beard squig 'Keith', the Stompaz have carved a bloody path across the stars. The love of dakka is not lost on this mob, it's customary to fire off their sluggas noisily as they plunge down, green boots first, so their enemies can respond by running in terror ('cos dat's funny!') or stand and prepare to fight back ('cos dat's even funnier!').
On the Lookout For: Up to 19 Stormboyz models (for a grand total of 20 models in the mob).
Model Requirements: Must be recognisable as a Stormboy Ork.
Mob Paint Scheme: Must incorporate a militaristic theme to the painting whilst keeping to Waaagh Dakka colours. MUST have Green Boots (or be barefoot) - Yer Stompaz Must Be Green Ta Be A Stompa!
Mob Battlecry: Oooo Wantz Ta Live Fureva?!?! DIVE DIVE DIIIIIVVVVVVEEEEEE!!!!!

No Warbuggy/Wartrakk Squadron has been posted yet, but check the Waaagh Dakka forum discussion thread

to see if one is currently in the works so you can join in. If not, feel free to be the first to get the mob started! If you do, make sure you post your intentions & WIP pics in that thread so we don't end up with two (or more) people simultaneously working on different concepts for the same type of mob!

Warbuggy Squadrons are made up of 1-3 Buggy or Trakk models (armed with twin-linked Big Shootas). Any model may replace their Shootas for Rokkits or a Skorcha. 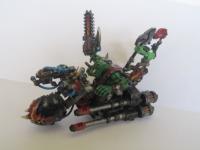 Mob Description: WarOne's combination of deffkopta rotor blades and stormboy rokkit packs has created a deafening and uncontrollable new machine called the deffstorma. Deffstorma pilots are not only insane and deadly, but completely and utterly deaf. Hence, a deffstorma.
On the Lookout For: Four other deffstorma pilots with any assortment of wargear they can muster on their unpredictable machines.
Model Requirements: Must incorporate parts of a deffkopta with the model. Unit members can be as creative as they want.
Mob Paint Scheme: As piloting skills are highly sought after, WarOne does not have a particular concern for color scheme so long as he can tell it is apart of Waaagh! Dakka (so as not to shoot down his fellow pilots).

Mob Description: Only the most crazy of grot's volunteer to be put in a Kan, fed up of the big boys bossing em around. The one's that survive the operation become a key part of the ork army. Practically fearless after the local Painboy's fiddled with their "inny bits" and made a few improvements, Da Kroozin Klanker's are often at the front of the charge in battle, the grots inside screaming their orky lungs out, and revving up their close combat weapons. Trampling foes (and sometimes friends!) they storm through the enemy, leaving a bloody trail of mangled bodies in their wake. Their voices may be small but their weapons and most importantly their hearts are big, so join up join up!

On the lookout for: Two Killa Kan's, preferably with a different weapon loadout but not too picky!

Model Requirements: A close combat weapon and a shooty gun, anything else is optional!

Mob Paint Scheme: A Bronze drybrush over Black Primer, followed by a Gunmetal Gray drybrush and finally a very light drybrush of Silver over prominent areas, other methods can be used as a base for the model of course. Then I paint the details mainly Flat Yellow, with some orange, red, gray and green for diversity. All the yellow areas are then accented with Cavalry Brown . The base is done as per requirements with gravel drybrushed with Stone Grey after a basecoat of Black. 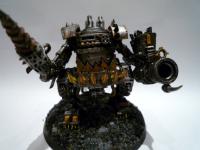 Mob Description: Led by KingCracker, they are the roughest and richest Orks in the whole army and have the gear to show for it. No mob epitomizes Waaagh Dakka more than the flashy guns of the Kustom Killas.
On the Lookout For: Up to 9 other DCMs (for a total of 10 models in the mob) to be Flash Gitz, one of which can be a Painboy. Also, up to 3 Ammo Runts total.
Model Requirements: The Kustom Killas naturally have the 'More Dakka' and 'Shootier'upgrades, so their weapons must have lots of barrels, scopes, etc.
Mob Paint Scheme: Being the quintessential Waaagh Dakka unit, they follow the army paint scheme to the letter...lots of yellow, black and grey. 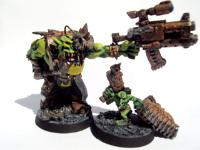 Mob Description Waaagh Dakka is about da dakka. What makes more dakka den a kannon? Alfndrate loves to fire the kannons at anything and everything, even his grots. Alfndrate believes Kannons makes da most dakka, and any grots crazy enough to werk wif Alfndrate gotta love dakka as much, even if dey might be da dakka

On Da Lookout Fer Gunz, gunz, and more gunz. Alfndrate is looking for 3 Kannons (Da other big gunz don't have no place in dis mob), and 12 grots to crew them, 3 grots fer "ammo"... er ammo runts, and a squig hound to keep him amused when Waaagh Dakka isn't firing all of his guns.

Model Requirements Alfndrate has poor eyesight, and low enthusiasm for any moment where the big guns are not firing, so he often can't tell the difference between grots and da dakka fer the kannonz. All grots wear grey cloth with the dakka highlights. The golds, yellows, blacks and reds. 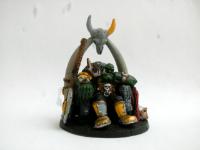 No Zzap or Lobba Big Gunz Battery has been posted yet, but check the Waaagh Dakka forum discussion thread

to see if one is currently in the works so you can join in. If not, feel free to be the first to get the mob started! If you do, make sure you post your intentions & WIP pics in that thread so we don't end up with two (or more) people simultaneously working on different concepts for the same type of mob!

Big Gun Batteries are made up of 1-3 Big Gunz, up to 12 Grot Krew and a Runtherd (DCMs only for the Runtherd). The Runtherd is accompanied by a Squighound and the battery may also include up to 3 Ammo Runts.

No Looted Wagon has been posted yet, and even if one was, each Looted Wagon is a unique mob so you can always add another Looted Wagon. If you are planning on adding a Looted Wagon, please post about it in the Waaagh Dakka forum discussion thread

(including WIP pics) just so everyone knows what you're working on.

Looted Wagons are typically a looted version of a Space Marine Rhino, Razorback, Predator or an Imperial Guard Chimera, Hellhound or Leman Russ. They have a transport capacity of 12 models unless armed with a Boomgun. If not armed with a Boomgun, may take a Skorcha. May also always have up to 2 Rokkits or Big Shootas.