well, reading through the last Kickstarter updates on the shipping situation, sounds like I'll probably be one of the last to get my pledge since I have a ~1500 USD order and went for single wave shipping. I'm definitely one of the "large orders" in the phase three shipping pool.
This ain't no pansy GW Armor, son - Digital Sculpting Plog, Now with Heavy Weapon Platforms!
Sympathy for the Devil, or: The Project Log from Hell

Ma55ter_fett wrote:It reads like the ramblings of a Nigerian lobotomized Shakespeare typed into a cellphone with a very aggressive autocomplete function.


They do not actually have a mini for the clanhells horse heavy attack VTOL Garuda, but the IWM Balacs look close enough so i got a pair- 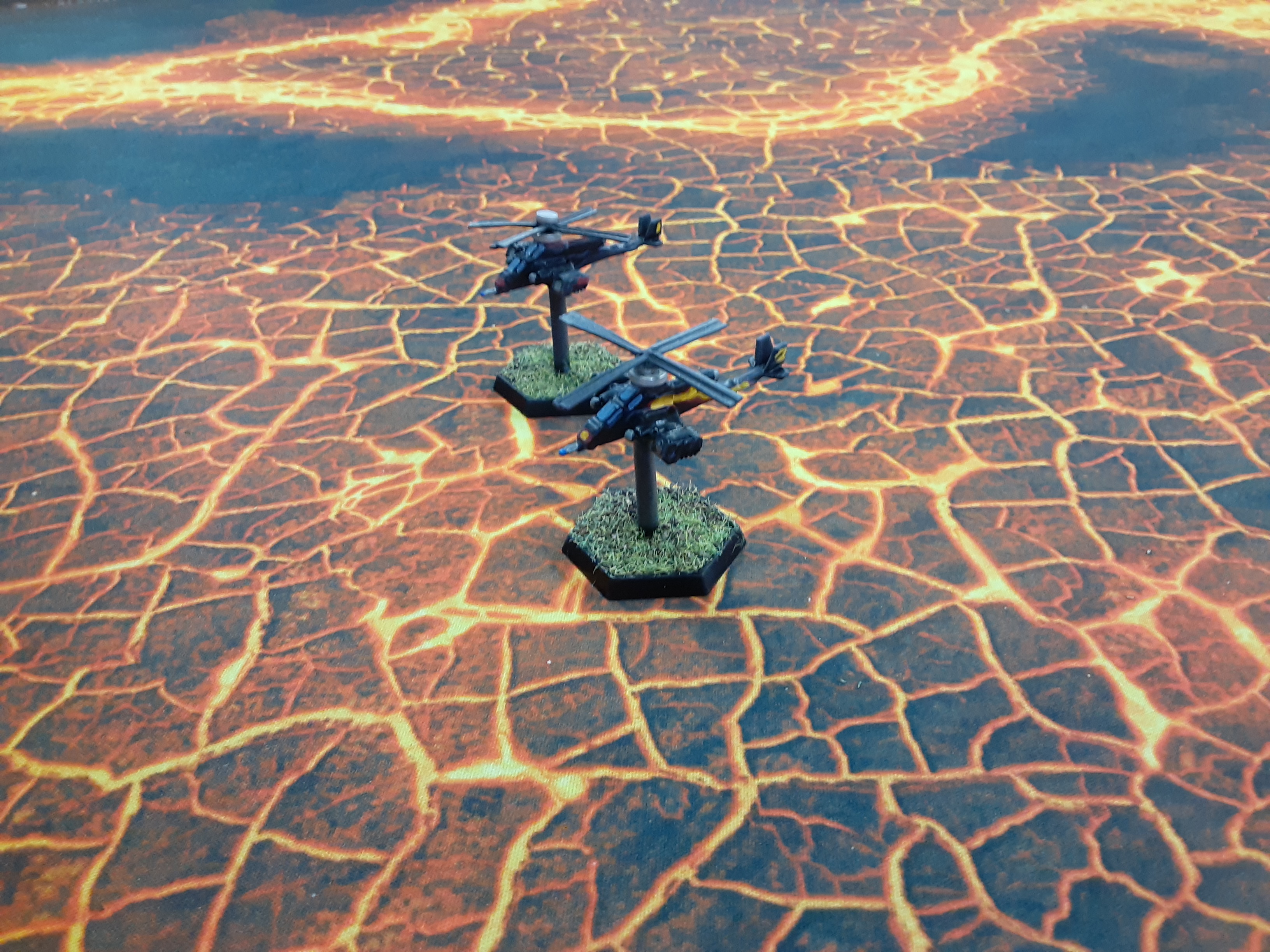 Legendary Master of the Chapter


so amusingly my uncle's asked me to teach him battletech, he's arguably responsable for my getting into the game (having loaned me a copy of the Crescant Hawks inception back in the day) sometime this fall when the weather's gone to gak I'll hgave to teach him, thinking a shadowhawk or griffon'll be a good learning mech
Opinions are not facts please don't confuse the two

I haven't even touched my Wave One stuff, and I'm about to get all my Wave Two stuff? Ugh. I'm gonna be drowning in Btech product! Oh, woe is me! Woe is me!
Kara Sloan shoots through Time and Design Space for a Negative Play Experience

What? Deprive myself and others my first world Battletech problems? How dare you, Sir! How dare you!
Kara Sloan shoots through Time and Design Space for a Negative Play Experience

What? Deprive myself and others my first world Battletech problems? How dare you, Sir! How dare you!


I wasn't suggesting that you deprive others of it, in fact I was offering to take on the burden of it. But if you are willing to shoulder the burden, I won't deny you of it.
Are you a Wolf, a Sheep, or a Hound?

Updates on Origins 2021, Final Cycle of Recognition Guide, and More

Origins 2021
Due to the shortened convention calendar, reduced exhibit hours at Origins, and COVID in general, Catalyst Game Labs will not be attending Origins 2021 as an exhibitor. We will continue to support our demo teams, and look forward to getting back to Origins in 2022.

Recognition Guide: ilClan
As Wave 2 of the Clan Invasion Kickstarter continues shipping, and with the ilClan sourcebook recently released, we have decided to move the start of the fourth and final cycle of Recognition Guide: ilClan. In addition to not crowding out those other major releases, this rescheduling will ensure that our creative team has the time to match the high level of quality of the previous RecGuide installments.

The fourth cycle will now begin with Vol. 19 on Friday, Oct. 15 and continue bi-weekly until concluding with Vol. 24 on Friday, Dec. 24.

The latest KS update had production numbers in case anyone is interested:

Wave Two shipping is of paramount importance to you all, as it should be. However, we've seen many backers asking about various reprints of core items. Since you don't just want your items, but you want to make sure the line is healthy and strong and available for anyone to leap in and grab what they need to start playing.

And we love that passion! As such, just as we've given you full behind-the-scenes data before, we thought we'd provide details on all printing (and reprints) to date of the miniatures of this Kickstarter, along with the core BattleTech boxes. 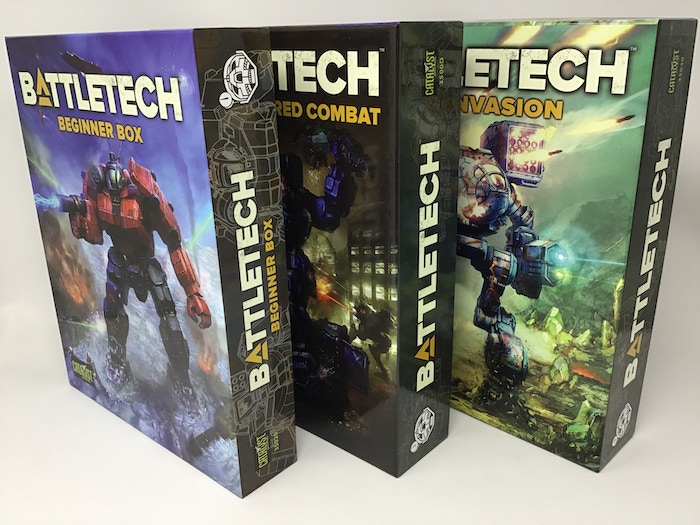 We have published 31,500 copies of this game since the start of 2018, and the sixth printing, at 10,000 copies (the highest quantity yet printed, giving us a total of 41,500) is done right now, and we are working to get it on a ship. Normally it would be available by October, but with all of the shipping snafus around the world, it will likely be November before it's available.


A GAME OF ARMORED COMBAT

Once again, from when this was first released in early 2018, we have published 33,500 copies. The fifth reprint, of 10,000 copies (for a total of 43,500), is on a ship and scheduled to arrive into the Savannah port by September 14th. If that stays on track, it means the base game will be available again to stores and our website by early October. Based upon sales projections, we are already looking to start the sixth reprint of this box by the end of the year.


BY WAY OF COMPARISON

Just for comparison purposes, to showcase the insanity that has been this magnificent resurgence you have helped create, FanPro US and Catalyst Game Labs, from 2002 to 2017, published and sold four base box sets: stock # 10980 (one printing), 35000 (three printing), 3500A (one printing), and 3500B (two printings). Four boxes in fifteen years sold roughly 40,000 copies combined. As you can see above, in just over two years we've nearly matched that with just one box. And by the end of the year--making it roughly three years since this all began with the release of the Beginner Box and A Game of Armored Combat, we'll have three box sets that each will have surpassed that number.


Meeting the voracious demand for these high-quality box sets keeps us busy, but you can see that the numbers are clear: there's more BattleTech on the shelves now than any time in the last two decades. 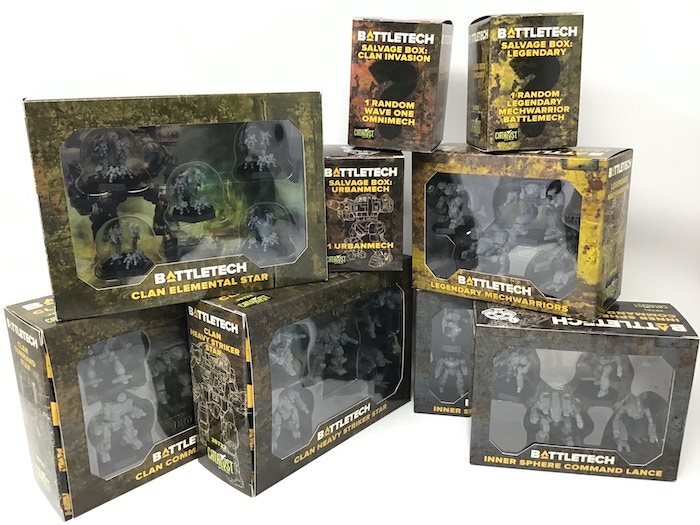 The following numbers were printed of the Wave One ForcePacks:

And the Salvage box numbers:

Before Wave Two, we did the following Wave One reprintings. This is currently on a ship, arriving early September into the Savannah port. 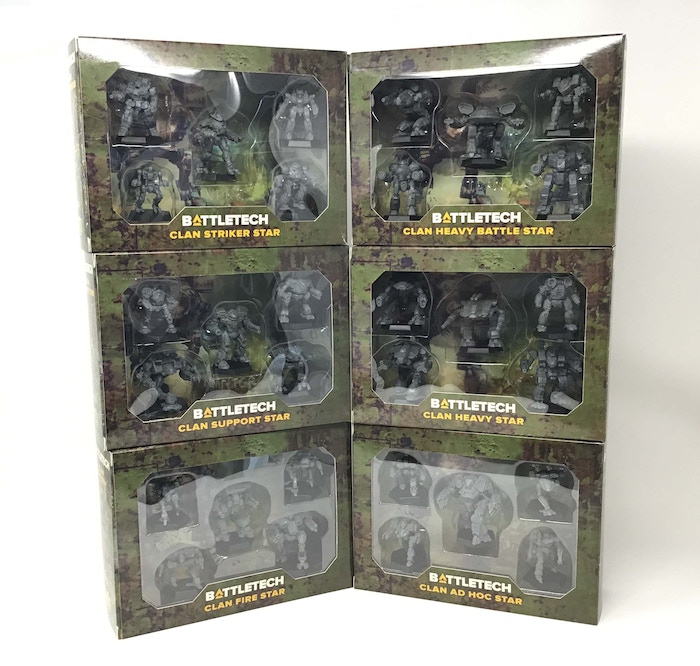 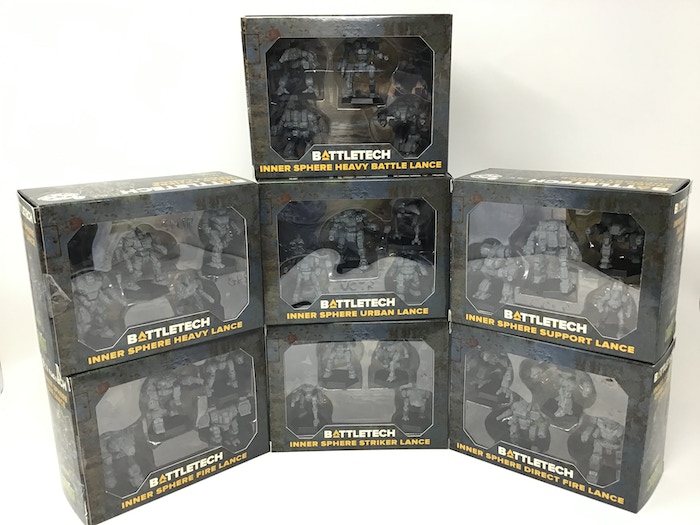 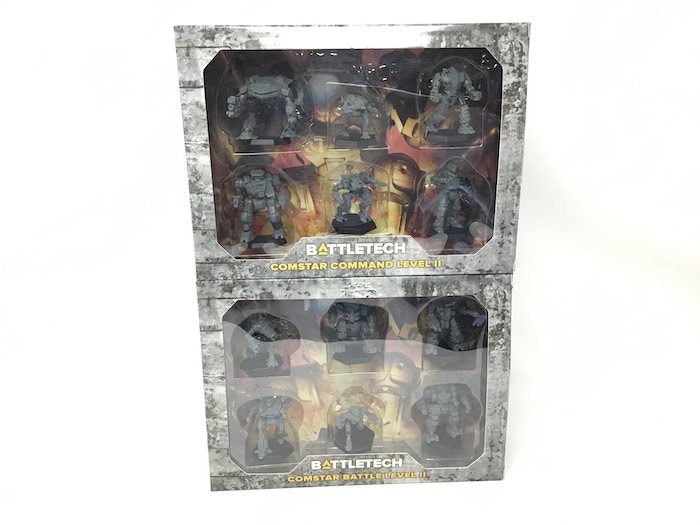 The following numbers were printed of the Wave Two ForcePacks (all of this has arrived at QML, of course, as shipping is underway!):

And we ordered more of the following as a restock as part of that printing: 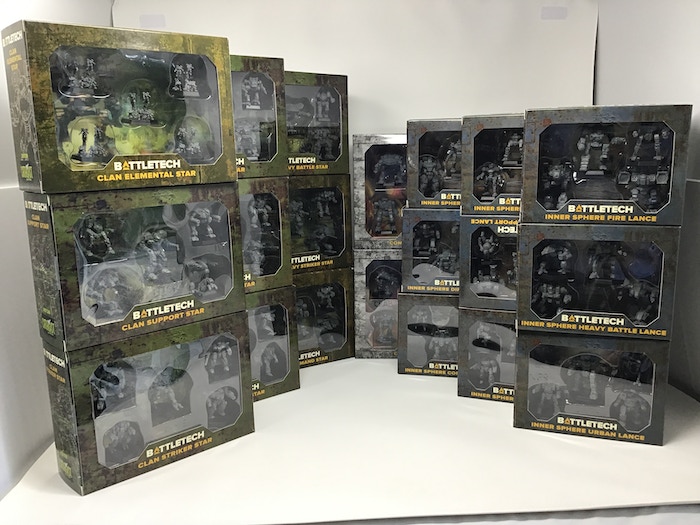 The following are currently scheduled to finish printing by early September, with most of it already finished (they were ordered back in April). Again, trying to take into account the current shipping issues, we are looking at either late November or December to have everything back in restock. Again, to be clear, the numbers directly below are completely beyond the needs of the Kickstarter, to carry us well into 2022. 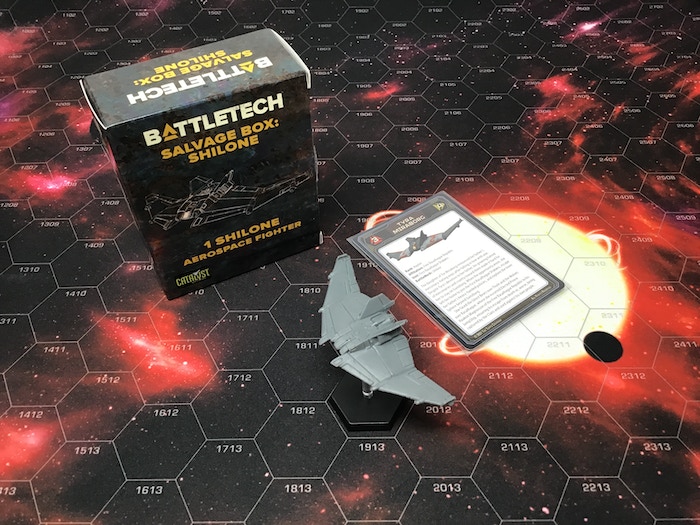 As we announced, we secretly produced a thank you miniature:


Salvage Box: Shilone: 20,000
We've gotten a question from some baclers of whether there will "be enough." As you can see, we absolutely have plenty to cover every last backers and then some. 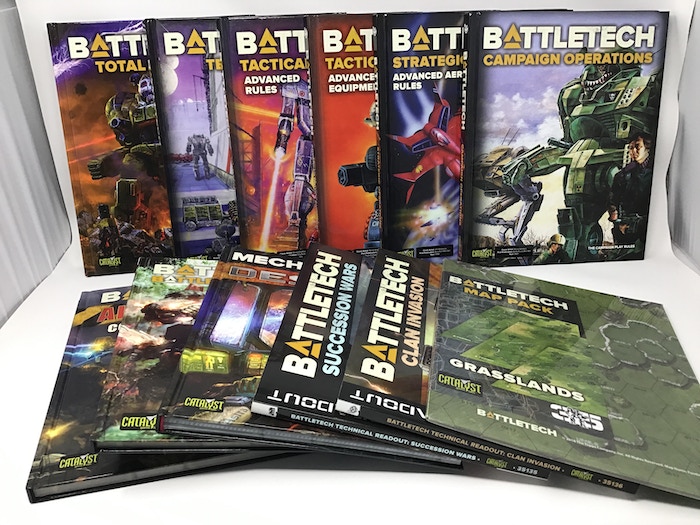 BUT WHAT ABOUT THE BOOKS?!

Obviously the box sets and ForcePacks form the core of the line now, but the core books are still a crucial element. And so after all the miniatures numbers above, thought I would share some book numbers as well (all of these are just within the last two to three years!):


WHAT DOES IT ALL MEAN?

What does all of that mean for the health of BattleTech and its availability to the market?


Well, it means that despite the insane rocket ship BattleTech has become the last two-and-half-years we have been on top of reprints and restocks. And it simply is the nature of the current world situation of delays in production and shipping that have pushed releases back. But that by the end of the year we will be stocked as we have never been stocked in the history of BattleTech in over 35 years. It means that by the time the last of the ForcePacks above hit our warehouse and start rolling out to gaming tables around the world, we will have published nearly 2.8 MILLION plastic miniatures in three years!


Thanks to all of you for helping us achieve this incredible moment for this game and universe we all love!

Kind of interesting to see how much is going to be out there.
Racism is the little things - Twitter thread by Eric Lang

I got my Wave 2 package! Fire Star for my Jade Falcons, and the two Level IIs to start my Comstart Level III.

The Shilone is pretty nice, though a little bent but nothing a quick dip in hot water won't fix.

Initiative deck looks nice and comes with a little rulebook on how to use it.

Also picked up the desert mapsheet pack to expand my collection.
By Brush And Sword, my blog

Can you show us some of the desert stuff?

Also how does the Initiative Deck work?
Industrial Insanity - My Terrain Blog
"GW really needs to understand 'Less is more' when it comes to AoS." - Wha-Mu-077

Some of the desert maps: 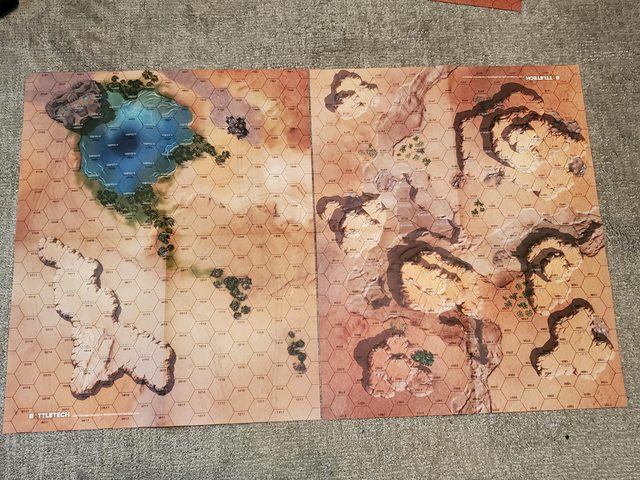 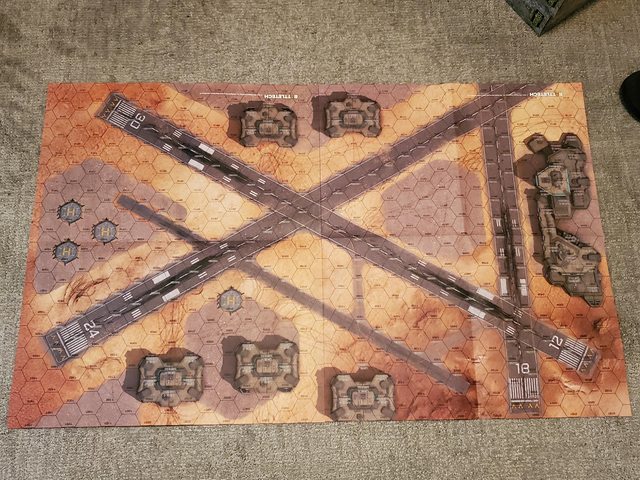 As for the initiative deck, it's a 67 card deck with standard poker numbers (ace through king), with the suits replaced by the Successor Lords houses, the face cards replaced with Mechwarrior, Duke, and Successor Lord cards, and two random Star League cards instead of Jokers. There's a suit ranking that's not surprising = Davion>Kurita>Steiner>Marik>Liao.

Each card has its own little special effect written on it that can differ between factions. 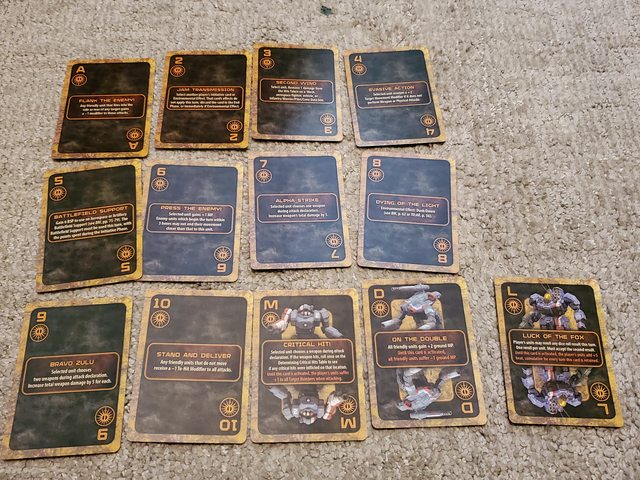 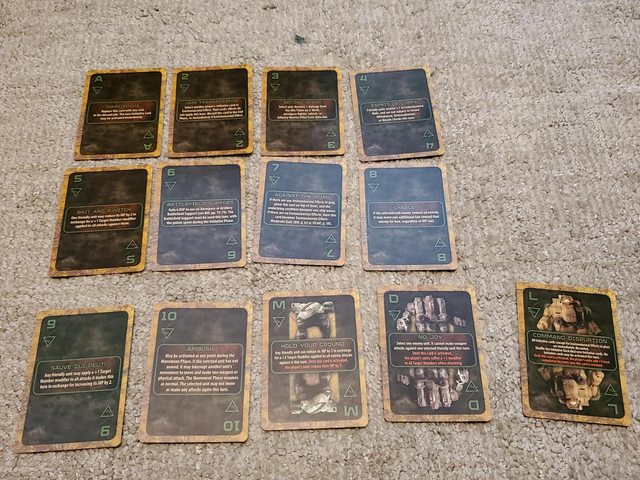 The method for using them is a little wonky, using a control deck to randomly pick cards that match the number already issued out to players or groups of miniatures.
By Brush And Sword, my blog

I'm just hoping to get my chance at some of the new stuff after the KS backers get theirs, as I only got into collecting Battletech AFTER the kickstarter (never even knew it was going on). I managed to buy the AGoAC box and one each of the IS mechs seperately from Fortress Miniatures, but that was all before April. Nothing since, if I want the plastics (there is always the option of 3D printed mechs, of which I have a couple).

I have random mechs from over the decades and played the video games, but never really took the plunge on the minis game until I saw the new Starter Sets in real life and the awesome new minis and slapped myself for not getting into the KS, at least at a low level.

"By this point I'm convinced 100% that every single race in the 40k universe have somehow tapped into the ork ability to just have their tech work because they think it should."

The Land of the Rising Sun

Hopefully you'll have the chance of picking up every important from the KS. Who cares if the faction dice never come to be if we can have unlimited access to Marauders!

M.
Jenkins: You don't have jurisdiction here!
Smith Jamison: We aren't here, which means when we open up on you and shred your bodies with automatic fire then this will never have happened.

Raxmei wrote:24ps is the range. 24". If that were the points cost then lasguns and plasma guns would cost the same amount and flamers would have a cost of "Souffle".