Subject: Re:2016's "A Tale of Many Gamers" MkII: Showcase: December 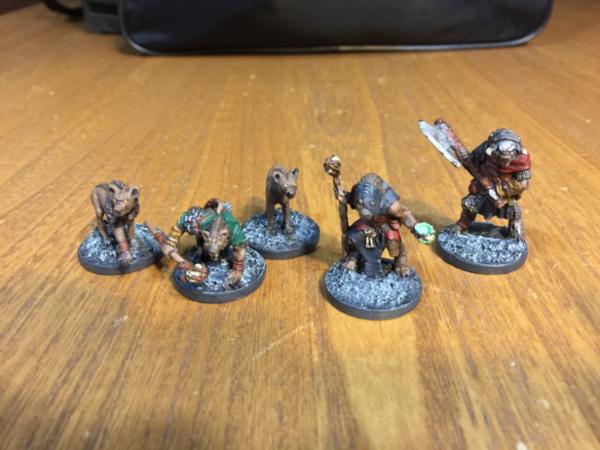 
Slinky
• Lord of the RIngs
Uruk-Hai Shaman and the trees that he communes with... 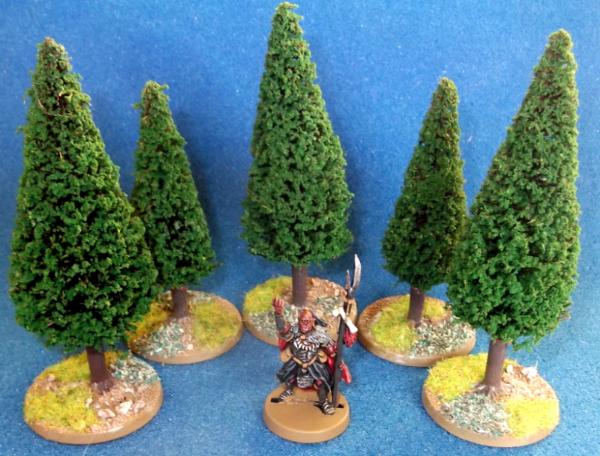 Archer
• Brettonia: The “Vain” Quest for the Grail, the 11th Crusade of Araby

Angron, Primarch of the World Eaters 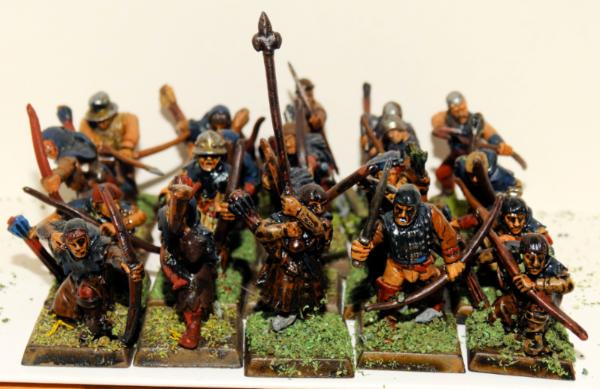 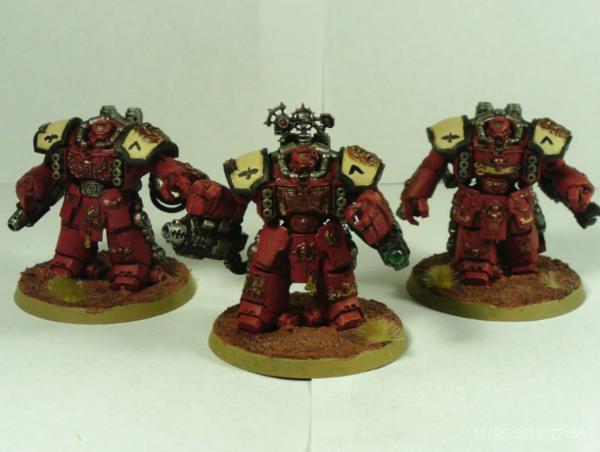 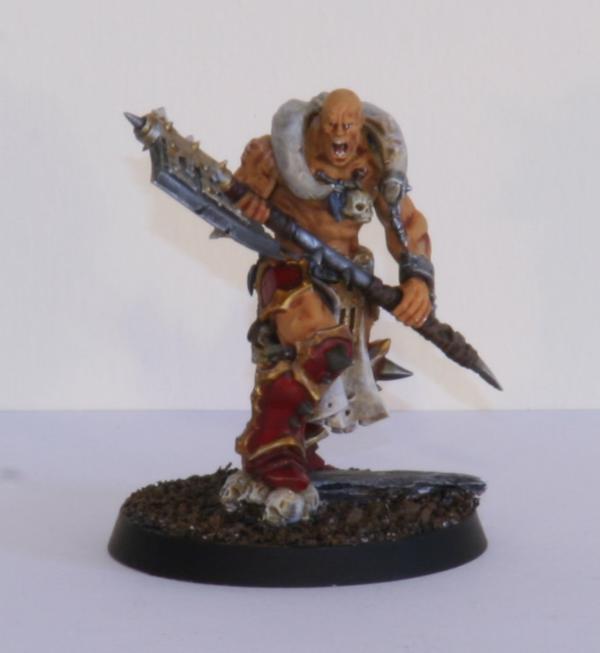 Subject: Re:2016's "A Tale of Many Gamers" MkII: End of Challenge Showcase

My Painting Pledge:
I had reasonable success with my plan to paint at least one Gondor and one Undear unit per month – I managed it but sometimes I only got a single character model done for one or the other, and I found the drawback was becoming amazingly bored with both Gondor and Undead. Though I still want to finish the damned armies one day. With that in mind, and inspired by how some of the participants in the first challenge “cheated”

I’m going to keep with the two units a month target, but this time it will be:
Minimum:
• 1 unit of Gondor OR Undead OR Ogres
• 1 unit of anything else from any game.

The unit rules above will still apply – a single tactical marine doesn’t count, but an apothecary does. This will also give me a chance to revisit some of my “2016 painting resolutions” where I talked about things like getting my Dark Angels tableworthy, not to mention not killing myself from boredom painting the same stuff.

I'm glad that you're starting up another round. I'd like to start this challenge with something ancient-- Citadel Melniboneans from the mid '80s.
Now showing a mostly-finished Mech!

Painting Total as of 4/1/2021: 24 plus an iron golem and five spider nests and all the obstacles for Dreadball Xtreme

Lost focus on my Orks at the end of the first challenge, this time I aim to focus on Lord of the Rings models and terrain.
Assorted 40k and LOTR models - Click for blog...

I'm in. Will be focusing on Silver Tower stuff for the most part, with some Stormcast Eternals thrown in there as they need finishing.

There's a beast in every man, and it stirs when you put a sword in his hand

Most importantly, Win or Lose, always try to have fun.

Alrighty, I'm in if you'll have me folks.

I want to finish my dark vengeance set.

Helbrute and chosen are 80% done, the rest is in a basic state of assembly (mostly on sprue).

I'm in, again. I'd like to just claim my entire painting pile as my pledge. But, seeing as you want a game system, I'll choose three that I currently want to get through: Infinity, Deep Wars/Shadow Sea, and Mercs: Recon. I may choose to do some Mantic in there every now and then as well, but those three are my main choices. I'm also going to place a minimum challenge of at least 1 box, or 5 blisters per month.
My plog of really random minis. Includes Infinity, 40k, Deadzone, some 15mm, and whatever odd thing I come across.

I'm in as well

Cozy cockpit of an Imperial Knight

I'm in again, I quite enjoyed the previous (still ongoing) run, plus I can't let Leonard down now!

As with the previous run, my focus will remain on getting my Horus Heresy Solar Auxilia and Questoris Knights done, model by model. Slowly getting somewhere.

Thanks again for running this Azazelx!

Count me again please Azazel...as to what I will be painting it will be TBA announced at the moment but I may go the Barzam route for some variety.
My 40K and assorted projects: Genestealer Cult: October 15th http://www.dakkadakka.com/dakkaforum/posts/list/1290/583755.page#8965486

This is perfect timing, as I have a great six month project cooking: a rehabilitated demi-company of basic space marines. http://www.dakkadakka.com/dakkaforum/posts/list/60/675393.page#8708059

My main goal is going to be to complete a full squad each month, with the two Rhinos and the captain counting as the six squad.

My secondary goal is to finish my 30k, which comes down to a BaC box still on sprue, three MKI rhinos, and a MKI vindicator.

I'll enter this time if you don't mind I'll enter the Army of New Haven http://www.dakkadakka.com/dakkaforum/posts/list/688527.page#8633125 completing at least 1 legal Kings of War unit a month for a Kingdom of Men army.
"But me no buts! Our comrades get hurt. Our friends die. Falkenburg is a knight who swore an oath to serve the church and to defend the weak. He'd be the first to tell you to stop puling and start planning. Because what we are doing-at risk to ourselves-is what we have sworn to do. The West relies on us. It is a risk we take with pride. It is an oath we honour. Even when some soft southern burgher mutters about us, we know the reason he sleeps soft and comfortable, why his wife is able to complain about the price of cabbages as her most serious problem and why his children dare to throw dung and yell "Knot" when we pass. It's because we are what we are. For all our faults we stand for law and light.
Von Gherens This Rough Magic Lackey, Flint & Freer
Mekagorkalicious -Monkeytroll
2017 Model Count-71

I think I will join this, if you'll have me, and put Frostgrave as my topic!

I'd like to join in. I have a whole bunch of stuff to do for our Tribal game. There are several different genres/cultures/periods I'd like to cover.

I have i) prehistorics/cave-wars, ii) african masai and lion warriors, iii) street gangs, iv) gladiators and v) vikings to do.

I would like to do one unit (5 figs) of short weapons, one unit of long weapons and three heroes, per month, for each of the above.

I have some stretch goals as well... I have some lasercut terrain/pieces from Knights of Dice and Dark Ops which I would like to put together and paint.

I've made a start on the neanderthals, painted a unit of short weapons and a hero (lucid eye mini's, now bought out by Warlord mini's):

I'm currently having problems with the undercoat (Army Painter black)... I'm not sure if I shook the can well enough or something, but it's coming off the figures WAY too easily. The above figures are already starting to show big chunks of metal through the paintjobs. I don't want to strip and paint them again... any suggestions as to do what to do? I'm currently thinking of slathering on some satin varnish, letting it dry really well, touching up the paintjob, and then a coat of testors dullcote to finish it off.

For the future, my friend is suggesting I should wash my metal figures in warm sopay water before undercoating... another friend (a caster) says it'll make no difference...

I'll be joining in either tomorrow or by wednesday. I have "King Vlagorescu's Ghoulish Host" on its way. So it'll be the GW AOS Flesh Eater Courts for me.
Poor ignorant guardsmen, it be but one of many of the great miracles of the Emperor! The Emperor is magic, like Harry Potter, but more magic! A most real and true SPACE WIZARD! And for the last time... I'm not a space plumber.

Definitely down. I'll be trying to finish as much fantasy wargame (KoW) orcs as the first run of the challenge.

I wanna get six (or more) units done but I'll be allowing for flex goals of skirmish forces (probably TNT) in case I need a break. This leg will have more infantry I think so I may have to push and then fall back a bit. Or work out a horde over a couple of months and post a small team from another system for the month.

Put me down as continuing on my Tau army. I've still got lots left to do on them, and ultimately I'm more likely to actually throw some paint down if I have a deadline or something. Motivation is key!
My armies (re-counted and updated on 9/25/20, including modeled wargear options):
Dark Angels:

Some very cool stuff pledged so far. Josh's ones have the most "wow" factor for me personally. I can only wish I had a force worth of those models.

Just remember, folks - this second round doesn't start until JULY. You can start before then of course as it's all about finishing models and units, but we've got a couple of weeks before even needing to begin yet.
https://azazelx.com/
My gaming, modelling & miniatures painting blog.
---
Working backwards through my threads to recover after the Photobucketpocalypse. Newest posts will be fine, older ones may be more sketchy until I get up to them!
Azazelx's P&M Blog. Latest: Photodump 26th June '19
"A Tale of Many Gamers Painting Challenge" V: Jan-June 2018 - Continuing the Slack Version
A Viking Warband WIP

I mainly play skirmish games, but am still fairly active with 40k. I play Warcry, Arena Rex, Middle-Earth, Blood Bowl, Batman, Star Wars Legion and The Other Side as well, but my main game is Malifaux.

Last time round I had a bad case of hobby butterfly. I suspect I'll have the same down here but put me down as doing Sharp Practice/15mm 18th Century Imagi-nations.

I've also had a good idea for a stretch goal (or possibly Julys main project) that will be a little bit different to anything I've seen so far in the previous thread but I'm not saying anything else yet.

Morning all - you can put me down for this, I think.

My current aim is to work on figures for board games, though the game being worked on may change during the period.

Gamgee on Tau Players wrote:we all kill cats and sell our own families to the devil and eat live puppies.

Kanluwen wrote:
This is, emphatically, why I will continue suggesting nuking Guard and starting over again. It's a legacy army that needs to be rebooted with a new focal point.


Confirmation of why no-one should listen to Kanluwen when it comes to the IG - he doesn't want the IG, he want's Kan's New Model Army...

I'll be aiming to paint all models up to a hero standard so hence the low model count.

I am planning to paint:
1500 points of Heer Gepanzert Panzergrenadiers for Bolt Action-The infantry is currently half painted and I am looking to get an Airbrush to do the vehicles
The remaining 1750 points of Epic Speed freaks for my 4k list
The UCM and PHR stuff from the Dropfleet Commander Kickstarter (whenever it arrives)
Probably other random stuff as well and I doubt that I will get everything finished but I'll see how it goes.
My PLog